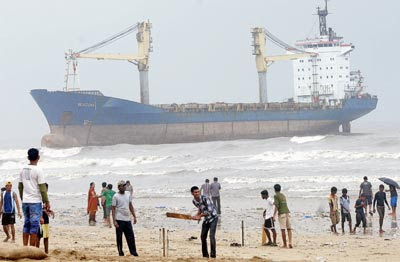 MV wisdom, a 145-metre long cargo vessel bound for Alang ship-breaking yard, sparked a major scare on Saturday afternoon after it broke free from its tug and drifted towards the Bandra-Worli Sea Link.

The unmanned ship eventually ran aground off the Juhu beach “late in the evening”, said coast guard officials.

On Sunday morning, walkers at the beach were greeted with the magnificent view of Wisdom against the monsoon sky. As the word spread, crowd swelled. “Every weekend, the beach sees plenty of visitors.

Coast guard officials said that the Singapore-flagged ship was “stable”. Arun Singh, the regional operations and plant officer for the coast guard’s western command, said that Wisdom had run aground 2.5 km from the Juhu beach.

He said that the talks were on with its owners. “We will get tugs to drag the ship out,” he said.

The directorate General of Shipping will conduct an investigation into Saturday’s incident. The 9,000-tonne MV Wisdom posed a risk to the Sea Link after it went adrift owing to bad weather.

“If the ship was being taken to Alang (from Colombo), we wonder what she was doing near Mumbai’s coast,” a coast guard official had said on Saturday.