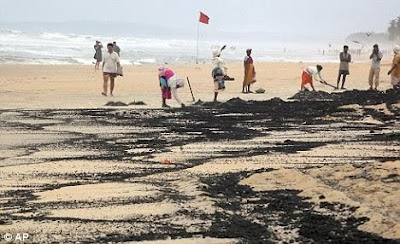 Goa's popular beaches turned black on 30 August evening due to oil spill off the coast of Panaji. Beaches like Calangute, Siquerim, Candolim in north Goa and Colva, Betalbhatim and Sernabhatim in the south were covered with black tar balls. South Goa beaches are covered with black oil which has been washed ashore.

Union Shipping Ministry's incompetence has been revealed consistently. Most recently, collision of two merchant ships off the Mumbai coast on August 7 had caused a massive oil spill.

Goa government is downplaying the tar ball menace. Union Minister of Environment and Forests Jairam Ramesh and the Shipping Minister has been asked to probe the matter.
of the oil spill. The oily trail across several beaches like Calangute, Candolim, Colva and Velsao and raised concerns about the success of the forthcoming tourist season.

The ships that pass along the coastline are the culprits. They discharge their waste which either surfaces before being deposited on the seabed or the waste gets erupted in monsoon.

One of the common causes for the tar ball phenomenon is careless dumping of used oil by a passing ship.
Posted by mediavigil at 06:50