The Hazardous Wastes/Shipbreaking/Platinum II (Dead US Ship) case is scheduled for hearing on 16th February, 2010 before the Supreme Court bench of Justices Altamas Kabir and Cyriac Joseph. The application with regard to end of life fugitive toxic US ship has been filed today.

Earlier, Ministry of Environment & Forests wrote to Interminiterial Committee on Ship breaking for which Steel Ministry is the nodal point in the matter of investigation of the fugitive dead US ship. It also took note of the need for probe into the issue of fake port of registry of the dead ships that entered Indian waters after the Supreme Court's order of 6.9.2007. Shipping companies use corporate veils to avoid liabilities of their end of life ships. The letter is enclosed. 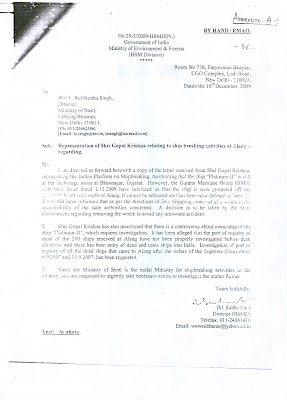